The History of Shopping Center Design

Shopping malls are in an era of fundamental change in design and operation.

The history of shopping center design is a fascinating evolution in consumer shopping preferences, alongside revolutionary technology changes.   And such evolution and revolution are under constant influence of underlying economic trends that propel matters along.

As a consumer product, retail malls are best understood in the context of the ever changing nature of consumer demand and retailing in the U.S.

The organization of retailing by developers and major retailers – over the last 100 years, the retail experience has been continuing innovation and adaptation. From the first mall products, a variety of products have been introduced each seeking to improve the distribution of consumer product and to satisfy consumer demand. These have included pedestrian malls in the nation’s CBDs, outlet malls, warehouse clubs, power centers, festival marketplaces, super-regional retail-entertainment facilities, value mega-malls, lifestyle centers, a return to “main street” retailing, brand showcase stores, themed retail and restaurants, and urban entertainment centers.

Changing consumer tastes and desires – What consumers want, desire, and value, is in constant change, due to all manner of influences. Regional malls when introduced were a wondrous, clean, and safe experience for shoppers accustomed to downtown and freestanding department stores.

Years later, shoppers discovered that all those regional malls seemed to be the same and lacking any indigenous character, giving rise to festival marketplaces and a return to “main street” retailing. Warehouse clubs, power centers, value mega-malls, and outlet centers were each a response to consumer demand for value, while lifestyle centers, themed retail and restaurants, and brand showcase stores delivered on consumer sensibilities for their leisure time, status goods. 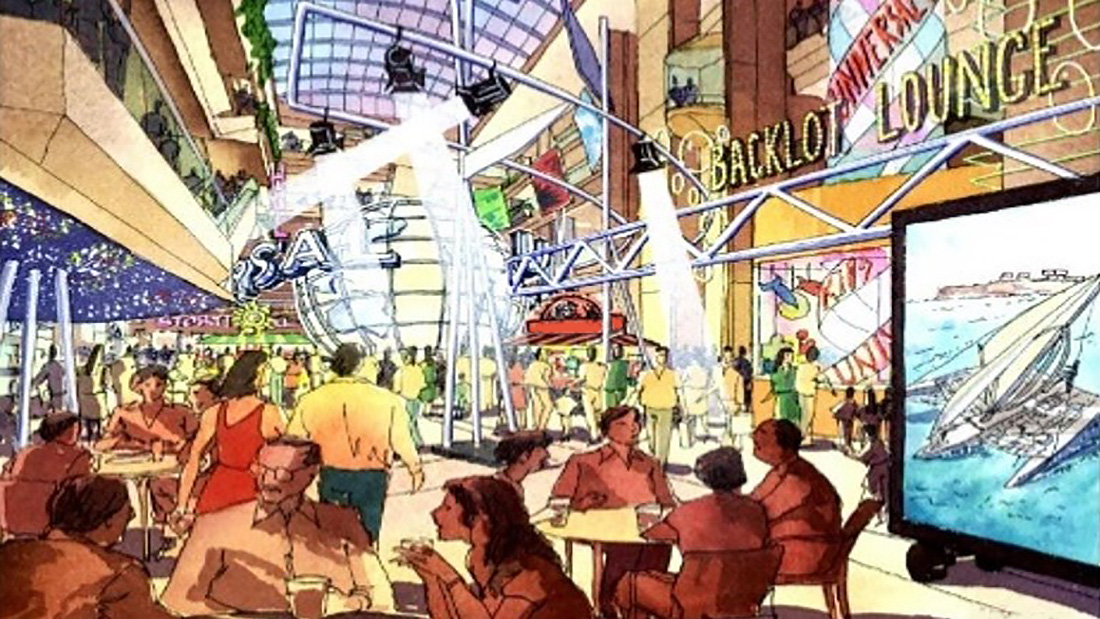 The history of shopping center design, is at its most essential, a study in offering consumers “the next big thing.” Whether the next thing was demanded by consumers, or offering in expectation that they were ready for something new.

Introduction of updated and/or new consumer products by retailers and manufacturers – Over the last decade, Apple has demonstrated and reminded us that retail industry operates subject to new demand and trends caused to innovative product introductions. The capability of manufacturer’s to provide exciting new lifestyle products such iTunes and iPhones now rivals the impact that fashion designers have long had on the runways of the world’s fashion capitals.

Technologies – The retailing industry operates subject to new and adaptive technologies, whether related to transportation, facility design and operations, supply chain, or Internet. The automobile and later the U.S. Interstate Highway System encouraged suburban development and regional malls. Modern HVAC systems allowed the enclosure of shopping environments. Fast-fashion retailers in control of their supply chains have allowed retailers on smaller footprints to compete with competitive advantage against the operating scale of major department stores. The rise of the Internet and various e-commerce businesses has expanded distribution possibilities for retailers along with competition and greater consumer choice.

The design and development of shopping centers has continued to evolve over the last decade, with many exciting ideas about consumer (guest) lifestyle, placemaking (or is that place-making?), and themed entertainment sensibilities integrated not only into project design but in ongoing operations, sponsorship plans, and multimedia tactics, as well.

Some highlights in the history of U.S. shopping center product innovation, includes:

1922 – Country Club Plaza opens in Kansas City (Missouri), a project of J.C. Nichols. The project is the first “designed and developed” shopping district in the U.S. that is not situated within a central business district, and managed and operated as a single business unit.

Small “strip centers” are developed throughout the late 1920’s in response to automobile congestion in the nation’s CBD’s.

1931 – Developer Hugh Prather develops Highland Park Shopping Village in Dallas, considered the first planned shopping center in the U.S. Highland Park Shopping Village features an innovation in organizing the shopping environment – storefronts face inward away from the streets and the entire facility is situated on one parcel with no bisecting streets.

1950 – Northgate Shopping Mall in Seattle opens, the country’s first regional shopping center to be defined as a “mall.” The mall features two facing strip centers with a pedestrian walkway in between.

1954 – Improving upon Shoppers World, the new Northland Center opens in Detroit featuring a “cluster layout” with a single department store at the center, a ring of surrounding stores, and a parking lot that completely surrounds the center. Northland Center is also the first center to have central heating and air-conditioning.

1956 – What is considered the first modern shopping center in the U.S. opens outside Minneapolis. Southdale Center in Edina (Minnesota) is the first fully enclosed mall with a two-level design. It features central heating and air-conditioning, comfortable common areas, and two competitive department stores as mall anchors.

The start of construction of the U.S. Interstate Highway System in the mid 1950’s, sparks an era of regional shopping center construction in the rapidly-expanding suburbs outside of the nation’s central business districts following World War II.

1959 – The nation’s first “pedestrian mall” is configured in downtown Kalamazoo (Michigan), closing two blocks of Burdick Street to automobile traffic. The first of many such conversions planned by Victor Gruen Associates, these pedestrian areas generally failed until automobiles were brought back into these “main street” areas. The urban pedestrian mall in downtown areas is a competitive response to regional malls being developed in the nation’s suburbs.

1962 – Sam Walton opens the first Wal-Mart Discount City store at 719 Walnut Avenue in Rogers, Arkansas.    Walton’s experience with retail dates back to 1945 and his purchase (and operation) of a Ben Franklin franchise variety store in Arkansas.

1972 – By 1972 the number of shopping centers had doubled to 13,174. Regional malls like Southdale Center and The Galleria in Houston (Texas), had become a fixture in many larger markets, and Americans began to enjoy the convenience and pleasure of mall shopping. During the 1970’s, a number of new formats and shopping center types evolved.

1976 – The Rouse Co. brings an interesting innovation to the retail industry in 1976 with the adaptive re-use of Faneuil Hall Marketplace in Boston. Faneuil Hall Marketplace is the first of the “festival marketplaces” built in the U.S. by The Rouse Company. The project, which revives a troubled downtown market, is centered on food and retail specialty items.  Festival marketplaces as an organized mall construct, takes its place in the history of shopping center design.

1976 – The first warehouse club store opens – the Price Club in San Diego. A Price Club is a retail store usually selling a wide variety of merchandise in which customers are required to buy large, wholesale quantities of the store’s products, which makes these clubs attractive to both bargain hunters and small business owners. The clubs are able to keep prices low due to the no-frills format of the stores, and the requirement typically for to pay annual membership fees in order to shop. In 1983 and 1984, additional warehouse club retailers, Costco Wholesale, PACE Wholesale Club, Sam’s Club, and BJ’s Wholesale Club also start operations.

1976 – The Bicentennial year also marked the debut of the country’s first urban vertical mall, Water Tower Place, which opens in Chicago on Michigan Avenue. To many experts, Water Tower Place with its mix of stores, hotel, offices, condominiums and parking garage, remains the preeminent mixed-use project in the U.S. With the opening of Water Tower Place and Faneuil Hall Marketplace, the shopping center industry had returned to its urban roots.

1981 – West Edmonton Mall, the first super-regional “retail-entertainment” mall opens in West Edmonton. The center introduces a full-bodied concept of entertainment and retailing, which developer Triple Five Group (founded by the Ghermezian brothers) repeats again in creating the Mall of America.

1986 – Terranomics of San Francisco opens the first “power center” at 280 Metro Center in Colma (California). Power centers are loosely defined as shopping centers of between 250,000 and 600,000 square feet, with approximately 75% to 90% of its space occupied by category killers or destination anchor stores.

1991 – The Internet is commercialized, which will lead to e-commerce.

1994 – The first online shopping occurs.  At the end of the year, USA Today features a side-by-side list of trends that were In and Out for 1994, with faxes among the “no longer cool list” and the Internet, on-line shopping, and the Marlboro Man on the “way cool” list.   Also, a little start-up company named Cadabra Inc. is founded by Jeff Bezos, on July 5, 1994, a company that will eventually be known as Amazon.com.

1994 – Netscape launches the first commercial browser, which was once the dominant browser in terms of ‘visitors.’ It would lose out in the “browser war.”

1995 – Jeff Bezos launches a beta version of Amazon.com of his new online marketplace, opening to the general public in July 1995.   In the same year,  Pierre Omidyar, start Auctionweb which is later renamed eBay.

1998 – Netflix launches, a company that will evolve to a business model that helps to transform film exhibition, and cinemas as mall anchors.   Paypal is also founded.

2001 – Disney’s version of Universal Studio’s CityWalk, with much the same role in on-site guest circulation and entertainment.

2010 – Oculus Rift prototype is ready, a first version of this groundbreaking virtual-reality headset.

2017 to 2019 – Retailers declare bankruptcy in increasing numbers, as consumer preferences for online shopping continues to grow.   Many retailer though, having reorganized under U.S. Chapter 11 law, emerge to continue operation.

2020 – The history of shopping center design enters its next revolutionary period.  The Covid-19 pandemic brings on retailer bankruptcies and mall foreclosures, prompting a myriad of mall redevelopment plans across the U.S. and worldwide.

2022 – The shopping center industry emerges from the Covid-19 pandemic, with online shopping usurping some of the direct-to-consumer aspects of purchasing.   Revitalized malls are envisioned, sometimes pared back, in exciting new mixed-use configurations.   The shopping mall as community gathering place takes primacy.